TRYING TO BREAK INTO CREATIVE ADVERTISING? READING TROTT WILL HELP A LOTT!

This was written by UK ad legend Dave Trott years ago.

Dave wrote this as a primer for would be ad wizards.

In it he addressed some of the fundamental flaws he kept seeing in student ad portfolios over and over again.

Flaws that I still see in student books in 2011.

Dave was a magnet for young ad talent in London in the 1980s.

Mostly because, I think, he actively tried to be a magnet for young talent.

They were cheaper and were more open to doing things the way Dave liked to do things.

Several of Dave’s students and employees went on to found their own successful agencies later on.

Working for Dave was the dream for many. Myself included.

I recall being extremely disappointed when a D&AD creative workshop I attended visited his agency Gold Greenlees Trott.

It was taught by two guys, neither of whom were Dave Trott.

I think Dave may actually left the agency at that point. There was no internet back then. How was I supposed to know?

And lapping it all up.

Times have changed a lot since Dave wrote this.

But the journey from “I think I’d like to be an ad creative” to actually being a creative ad professional remains the same lonely journey it always was and always will be.

Reading this could save you a lot of time and anguish.

The ad that made me start drinking lager

I remember thinking these ads were the funniest things ever. i was the first generation that had access to VCRs. that meant we could theoretically watch what we wanted. we were in fact limited to watching whatever Hollywood begrudgingly put on VHS or Betamax in 1979. I had the added incentive of growing up in the west of Ireland where the weather is simply miserable. wet, windy and cold. a great incentive to stay in and watch videos. and drink beer!

For some reason all the early films of Steve Martin were readily available on video. So we watched those A LOT. and they were really funny. This holsten pils ad campaign stole a clever technique from one of his movies and adapted it for an ad campaign.

Holsten pils was beer with a proposition: All the sugar turns to alcohol. Which to my teenage ears sounded like: this beer will get you fucked up!!!

To this day whenever I’m in a pub in London my eye instinctively searches for signs of Holsten.

This campaign was the work of one Dave Trott Esquire. You may have heard of him.

(I emailed this story to UK advertising legend and fellow twitterer and blogger Dave Trott. It’s about a man whose work we both admire a lot and was my first boss in advertising. His name is Ed McCabe. It’s the story of how I got hired by him. Dave said it would make a good blog post for advertising students. Dave is right. As usual..)

I was living in London at the tail end of 1989 and attending a D&AD creative workshop. By day I sold airtime on ITV, the UK commercial TV network. I wasn’t that good at it. And I urgently felt the need to do something I loved doing. And creative advertising was and remains it. I was smitten. I had just gotten a US green card in a visa lottery and was headed to New York in the New Year. The last stop on the workshop was BBH. The brilliant Martin Galton and Will Awdry taught it. In the pub afterwards I asked them who they recommended working for the USA. They asked me who I’d like to work for in the UK and I said “Dave Trott”. They gave it a bit of a think and replied “Ed McCabe”.

So off to NYC I went with one name in my head: Ed McCabe. After a while I began spending Saturdays in the library of the Pratt Institute in Brooklyn perusing their vast ad annual collection. Pretending that I was a student there. Seeing Ed’s work through the years confirmed that this was the guy for me. His work was so arresting and direct and strategically sound. He created the campaigns that made Perdue Chicken, Maxell Tape and Volvo – to name but three – household names and premium brands. He was a true advertising genius. The only one I’ve ever encountered in advertising. He was also a bit mad. But in a good way. Someone once described Ed as having adrenaline instead of blood. And dynamite instead of adrenaline. I’d say that was pretty accurate, if difficult to imagine perhaps.

The only problem was he had left Scali McCabe Sloves a few years previous and was off doing the Paris-Dakar rally and other fun things. But then he came back to New York and started a new agency. Unfortunately for me, only had a handful of creative’s working. So the chances of getting hired by him looked slim. Someone had to get fired or die. I would find out later that working for Ed increased the risk of both of these possibilities immensely.

But I was dead set on achieving my goal. I decided to create a book of ads targeted purely at Ed. And the best way to do this would be to stalk him. Literally. I knew where he lived and I knew where he worked. And I also knew he frequently took the subway to the office. So I followed him around observing the products he used. I read somewhere in an interview that he drank Fernet Branca and sparkling mineral water at lunch while he spoke to the journalist. I knew from experience this was a hangover cure so I created a campaign for that. I knew he hated then-upstart New York agency Kirshenbaum and Bond, so I submitted a really bad book of ads to their recruiter just so I could get a rejection letter from them. I put this letter at the front of my book with the headline DEAR ED McCABE, I HOPE YOUR IDEA OF GREAT ADVERTISING ISN’T THE SAME AS MESSRS KIRSHENBAUM AND BOND’S. It worked. I was hired. Only took me two years!

I asked readers to submit their favorite hard-selling ads. This is one Dave Trott sent in. It’s a classic. Ran for years here in the USA. You’ll see why. it was shot in 1959. slickly shot it is not. but the core idea will always work.

What’s your favorite hard-sell, can’t-argue-with-it, instantly-makes-you-want-to-buy-the-product ad? mine is the Cream of Manchester Ice Cream Cone ad for Boddingtons. I should see if i can buy a poster of that one actually. They looked amazing.

Dave Trott, we got your book right here!

We are huge fans of the legendary UK adman Dave Trott here at The Escape Pod. We’ve blogged about his blog before. And now we’re blogging about a book of his blog posts: an unauthorized collection of his wisdom that Allan Stevenson, a Welsh Escape Podder, received as a gift from his Catalan girlfriend for Valentine’s Day. And they say romance is dead.

That’s a picture of it below. Lovingly hand-crafted by the incredible Maite Canto, it’s like the Book of Kells of ad blogs. Only one exists. And no, you can’t have it.

If Dave was looking for a sign that maybe there might be a market for a collection of his wisdom, surely this is it.

An agency blog that’s actually better than this one!

Hard to believe but true. It really exists.

The blog is written by Dave Trott. Dave Trott is one of the true legends of UK advertising. He’s David Abbott’s equal. And Charles Saatchi’s equal. He says he’s not John Webster’s equal. I think he’s wrong.

But, unlike his aforementioned equals, Dave writes a blog. And it’s great.

Most ad blogs suffer from NOT being written by industry legends. Not Dave’s.

If you like free wisdom, you’ll love his blog. 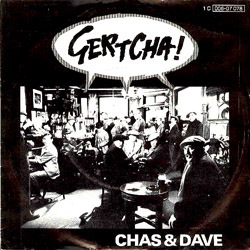